The folly of the obsession with source code

My favourite topic these days is the phenomenon of fundamentalist thinking. You don’t need to go to Iraq to find it, it’s all around us….

Recently I chanced upon a post entitled ‘Coding is not the new literacy’ by Chris Granger, who as far as I can tell is one of the smart young generation of start-up developers creating interesting new ways of doing software. I suspect he is not yet 30, going by his ‘about’ page. Not a bad post for a young guy. It essentially says the following:

In his view, ‘modelling is the new literacy’. He says:

Modeling is creating a representation of a system (or process) that can be explored or used.

I happen to agree with this, and I would go so far as to say that if you think that coding is the main activity of understanding or formalising a solution to a problem, you are profoundly wrong.

There are a few different ways to see this. One of them is described in my post ‘The reason most software fails’. The gist of it boiled down to the idea that building a system or software ‘solution’ is actually a scientific process, in the sense that you must start by understanding not just the problem domain but the deployment context, creating some theories, refine those theories by testing and further observation, and iteratively arrive at a working realisation of the theory in the deployment context. The process never finishes. The ‘theories’ are expressed primarily as models. Coding is an expression of the models into one or more specific programming languages, but it doesn’t properly embody the models or problem domain understanding; it’s just an expression of executable parts of the solution according to conclusions drawn from the models. All ‘coding’ involves working around the semantic limitations of the programming language to obtain the originally intended semantics.

The following diagram was my attempt to illustrate the variety of cognitive activity going on here. 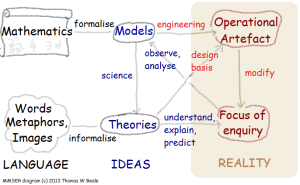 Here is what it looks like mapped to e-health.

Most of what we do is modelling. In the approaches used by any of the serious health informatics efforts, very little of the domain information or workflow semantics are ever converted to source code – instead, they are expressed as terminology, clinical content models, and computable guidelines. A lot of system logic and user workflow is of in code course, but this can’t be achieved without clear logical models of these workflows. Most of what is code is fairly generic stuff for moving data and notifications around in specific ways.

In fact in e-health, we do a lot of modelling in languages like UML, OWL, ADL, BPEL and Proforma. We use a lot of different languages to address different intellectual problems. Unfortunately, neither companies nor public institutions put much value in this, and it is a poorly supported aspect of most IT projects.

Here’s another quote from Granger’s post that nicely encapsulates the problem with thinking code is the main game (my emphasis):

Coding requires us to break our systems down into actions that the computer understands, which represents a fundamental disconnect in intent. …. We are not trying to model how a computer does something. Instead, we are modeling human interaction, the weather, or spacecraft. From that angle, it’s like trying to paint using a welder’s torch. We are employing a set of tools designed to model how computers work, but we’re representing systems that are nothing like them.

Even in the case where we are talking specifically about how machines should behave, our tools aren’t really designed with the notion of modeling in mind. Our editors and debuggers, for example, make it difficult to pick out pieces at different depths of abstraction. Instead, we have to look at the system laid out in its entirety and try to make sense of where all the screws came from.

Most of the human activity and the economic expense of generating good IT solutions for the real world is in the a) understanding of the problem domain and b) creation and refinement of models of phenomena in the domain. This is where the hard work is, and where understanding is encapsulated. This is what can be reused, and what should be supported especially in tough domains like e-health.

However, there is a prevailing idea today that ‘code is king’, with the implication that all the understanding of the domain, the system being built, and the models and paradigms on which all that are based will be primarily expressed in the code, and will emerge due to endless ‘refactoring’ of the code, à la the agile revolution. I’m not suggesting that agile ideas are useless (see my Amazon review of a recent book on the topic) or that messing round in code isn’t a useful way of doing some modelling, or working on certain ideas (although, if you scratch the surface, the type of languages used to do this seriously tend not to be mainstream languages, but things like Lisp, Clojure, Haskell. You won’t create much new understanding in Java, unless you are studying the problem of why it’s so hard to do simple things in Java).

The obsession with source code bypasses all these considerations, and makes all kinds of fundamental errors such as:

I would go so far as to say that the ‘code is king’ idea is a profound misunderstanding of where code sits with respect to intellectual value created in IT projects.

The result of this wrong-headedness is that private and public investment in IT projects typically measure success / output in code delivery milestones and fails altogether to require that reusable intellectual material is being created, particularly formal models. Consider that the UK NHS’s failed £9bn National programme for IT not only didn’t generate much in the way of working systems for the money, but generated no lasting legacy of problem space description, models, theories or designs, despite the fact that much useful intellectual activity of this sort, by world-class health informatics experts in the UK did occur. That’s quite a non-achievement.

Don’t get me wrong. Source code is important in many ways, and open source is also a good thing. It’s just not the fundamental thing. Don’t forget, all source code will be thrown away at some point. It is conceptual models that live on.

I know that none of the above will be listened to by the vast majority, but if I could make one plea to funders, public and private, it would be this: if you are about to fund a development that might take some years, and whose result is meant to function for 20 years, then you are funding an intellectual journey, not a ‘thing’, and you need to take great care to properly support the core intellectual descriptions and models that underpin the code. If you are forced to restart a few times, as you will inevitably have to, it will be these models of understanding that save you, not the code.

I work on semantic architectures for interoperability of information systems. Much of my time is spent studying data, ideas, and knowledge, and using methods from philosophy, particularly ontology and epistemology.
View all posts by wolandscat →
This entry was posted in Computing, Health Informatics, openehr, Philosophy and tagged e-health, Health Informatics, NHS, open source, openEHR, software engineering. Bookmark the permalink.

7 Responses to The folly of the obsession with source code